The Rise and Rise of the Double-Barrel

With lockdown restrictions finally easing, couples can look forward to getting their wedding plans firmly back on track towards realising their special day – albeit with continued obstacles and unknowns to navigate through. Couples who’ve been waiting to change their names can also make plans.

21st-century weddings and civil partnerships are noticeably different to traditional 20th-century ones, and a big part of this is what married couples wish to be called after they’re wed.

In the past couple of years, we’ve seen a continued increase in the number of people wishing to join their names. For example, in November, research by The London Mint Office to mark The Queen’s platinum wedding anniversary shows that 11% of married couples between the ages of 18 and 30 joined their names.

As the UK’s leading Name Changing Service, NameSwitch has also seen an 18% year-on-year growth in couples wishing to adopt a double-barrelled surname, which accounts for 12% of the thousands of name changes we’ve assisted over the last 12 months.

So, why are more of us opting to double-barrel their surnames? We spoke to five of our couples who shared their story: 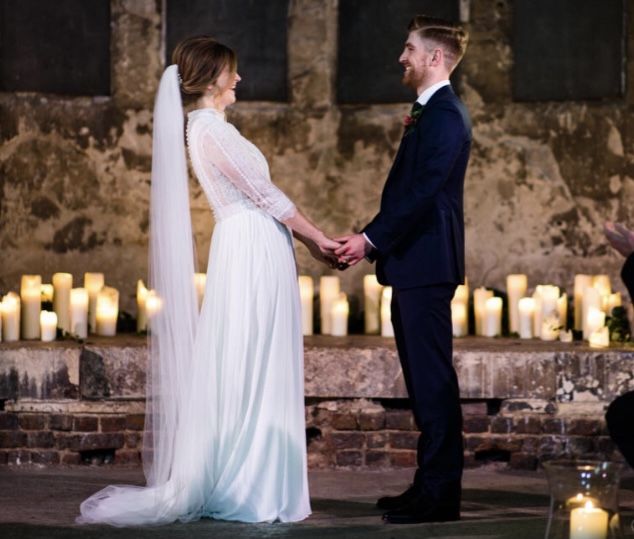 Hannah Swain chose to change her name to Hannah Swain-Evans to save “completely wiping away and losing the name I have had since birth”. Her husband chose not to change his name “I didn’t ask him to and didn’t mind at all.”

Hannah says that her friends “were very unbothered” by her decision which she feels is due to double-barrelling now being “something quite usual for our generation”. Her mother, on the other hand, wasn’t quite as convinced and raised questions about what surnames the couple’s children will have. However, Hannah says she’s happy to wait and see and has suggested that their kids could initially take the double barrel then pick their favourite surname when they’re older.

When Craig Mitchell-Wheadon got married, he and his fiancée wanted to tie both their family names together “to form our new family”. As it was also Craig’s second marriage, he was keen to make the partnership feel “different and unique”.

This “unique connection” has gone down particularly well with the couple’s friends and family, and Craig feels that it “really highlights the coming together of two people into a partnership sharing both their histories in one combined way”.

Val Stewart Howard chose to keep her name along with her new husband’s name, although her new surname is not joined with a hyphen.

Her main reason for going with both names is to “unite two warring families from legions ago”. It also allows her to keep her father’s name in her married name.

Although her partner chose to stick with his birth surname for professional reasons, any confusion that people encounter when addressing the couple doesn’t faze Val who says that “I will answer to whatever people call me – providing it’s polite!” 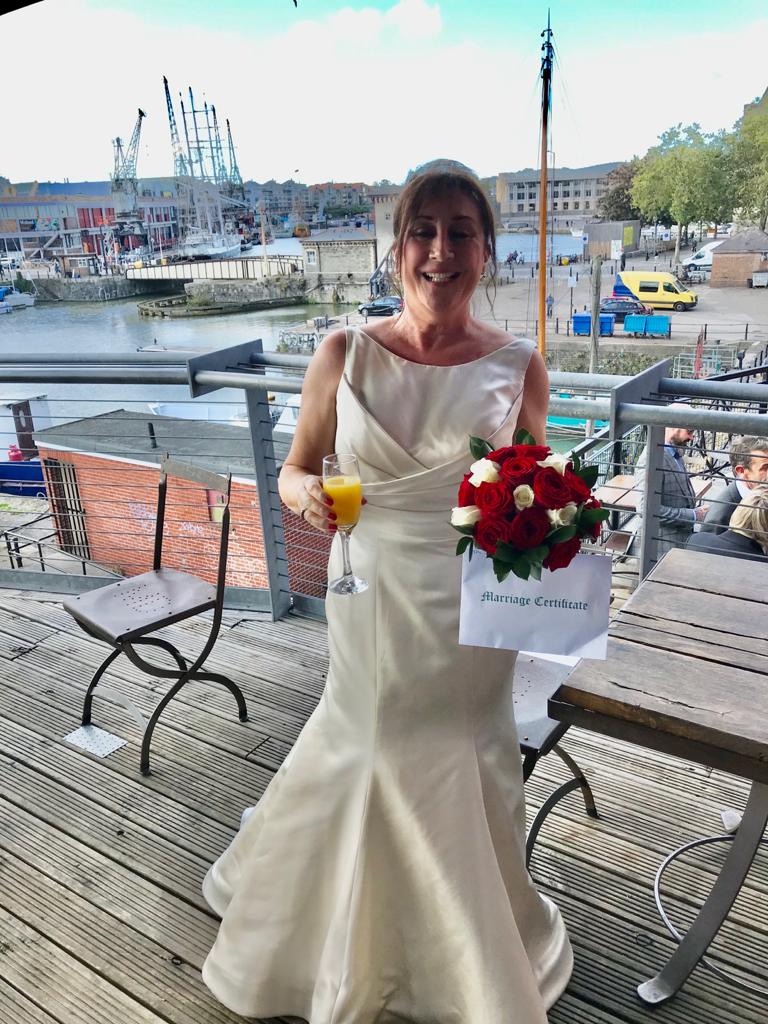 Penny Browning Perry has two reasons for joining her name with her husband’s. She says that getting married later in life meant that she had a greater affiliation with her own surname. Plus, she was concerned that taking only her partner’s name meant that her new name (Penny Perry) would prove to be “a bit of a tongue twister”.

Like Val, Penny decided not to hyphenate both names and took advantage of NameSwitch’s Print Package (which she kindly describes as a “brilliant service”) to make the process easier. 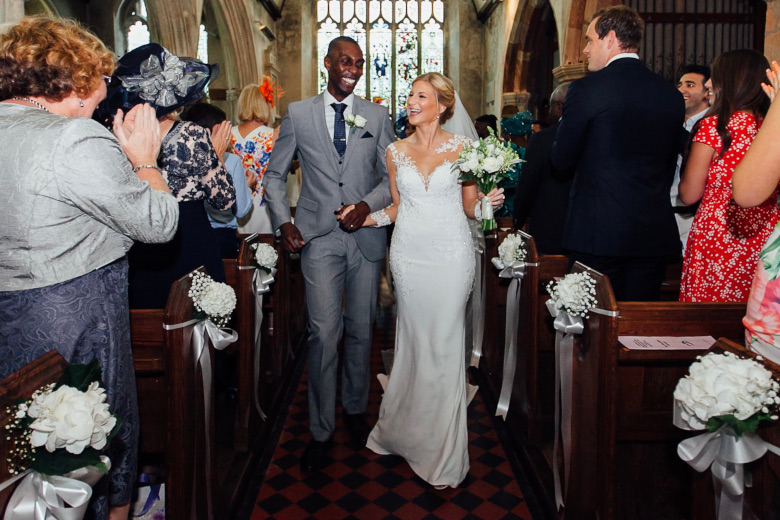 Dami and his wife both chose to change their names and are now known as Mr & Mrs Bakare-Kennett. The mutual agreement allowed his wife to retain her identity, and although Dami says that his family weren’t too keen on the idea for traditional reasons, the couple are very happy to share a double-barrelled name.

Is there an alternative to the Double-Barrel?

The creation of a blended name is a newer trend that we have seen rising over the last few years. This is also known as ‘meshing’.

Creating a completely new name based on what a couple chooses to preserve and weave together is a perfect setting for a new chapter. It’s perhaps one of the most symbolic signs of a couple making a stand that they want to do things their way. Co-creating a blended surname draws on a history that has meaning and makes sense to a couple.

If you wish to create a new name a deed poll will required. The rules around deed poll are less restrictive so the inspiration could come from a surname, middle name, grandparent or other. It can be a single surname or a double (even triple) barrelled set of new names.

For example Read and Duckerin becomes Rein as our soon to be couple, Jade and Sam shared their story.

“We felt strongly about wanting to share the same surname. We thought about doing a double barrel but our names together are a bit of a mouthful! Blending seemed the obvious solution for us.

Our original surnames are Read and Duckerin. We smooched them together by taking the first two letters from one and the last two from the other to make Rein. We tried loads of different combos, including fully jumbling the letters, but Rein felt right as it has clear elements from both of our original names whilst also being a word that’s easy to pronounce and sounds like a normal surname.”

We’re changing them after the wedding as that means we both have to go through the same process. Otherwise one of us would have to change now and then the other would change later, so it seemed a bit more complicated.”

If a couple decides to blend their names, how do they make the change official?

Creating a new surname will require a deed poll for at least one member of the couple and there are 2 possible paths for you to do this:

2) You both change your surname by deed poll after the wedding. You may want to discuss with your celebrant/toast master how you wish to be addressed/introduced as newlyweds and whether they would be able to incorporate your new name (unofficially) into the ceremony.

There are no set rules or sequences to the creation of a new name so either option outlined above should be weighed up to determine the best path for each couple. NameSwitch is always on hand if any help is needed.

As the UK’s favourite name changing service, we’re often asked by those wishing to adopt a double-barrelled surname after marriage if they need a deed poll. The good news is that you don’t as your marriage certificate entitles either yourself or your partner to combine your surnames side-by-side (e.g. Jones-Smith) in whichever order you prefer, with or without a hyphen. However, we strongly recommend that you order 2-4 original copies of your marriage certificate for each partner that wishes to be known by a double-barrel to enable multiple name change requests to be sent off in parallel.

As outlined above, you will, however, need a deed poll if you want to mesh or blend your surnames. Whether you are doing the traditional Miss to Mrs, opting for a double barrel or going all out and creating a new name, NameSwitch has got you covered. Why not check out our range of packages and let us help you fast-track to your next chapter.